The ‘Xenohunter’ bundle is the newest weapon skin bundle that has arrived at Valorant, and it is creating quite the controversy in the community for potentially having ‘pay to lose’ aspects.

If you’ve taken a look at the Xenohunter skins in the game, you should know that they come with a radar-equipped to them on the sides. While the radar seems to be the primary attraction of the Xenohunter skin line, many players are calling the bundle out for an obvious ‘competitive disadvantage’ it brings upon its users.

According to multiple social media posts that have surfaced over the past few days, the radar included in the Xenohunter skins can block a portion of the skins which would otherwise be visible when using the default variants of the weapons.

In competitive games like Valorant, every millisecond is important in determining the victor of a gunfight. Players facing even a slight delay in spotting an enemy player can easily be enough to turn the tides of a game.

A good example of the obvious pay-to-lose aspect of the Xenohunter skins can be seen when you’re in A Heaven on Ascent. As many YouTubers have pointed out, you can easily miss enemies sneaking under heaven if you’re using the Xenohunter skins instead of any other variant. 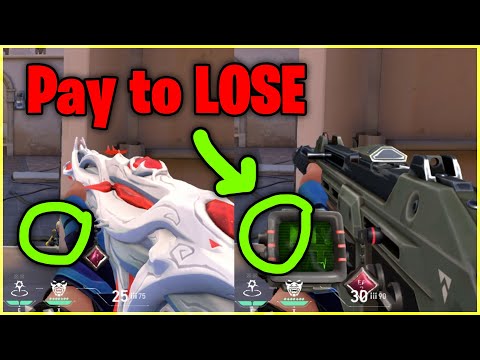 These pay-to-lose aspects are discouraging many players from buying the Xenohunter skins from the in-game store of Valorant. Fans of the title are also not very happy with Riot Games and are requesting the company to fix these issues with the Xenohunter skin line.