In this post, I will be discussing the best heroes you can reroll for in Awaken Chaos Era. After reading the entire guide, hopefully, you will have a good idea on which characters to look for while you are summoning.

Talking about summoning, if you want to know how to do that, along with some free redeem codes, check out the guide on rerolling and redeem codes for Awaken Chaos Era. You can know how to summon as well using the linked article. Moving on. let’s take a look at the top heroes to reroll for… In the following points, I will be showing you my Top 3 heroes to summon if you are rerolling. These can be different from yours since this is a personal choice. Let me know if you want to include any character or swap out any current ones. 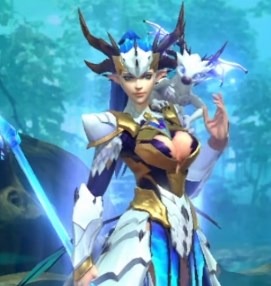 Hydrissea is the first one in my list. As you can see, she is a legendary 5 Star unit. Her main focus of power is AoE or area of effect skills. Her Trait Skill is called “DRAGONKIN”. Attacks have 50% chance to grant bonus attack.

This in return deals 50% damage to all enemies. Here are her max level stats:

She has a lot of mob clearing potential when it comes to AoE damage output.

GLACIAL SHARD deals 100% damage to an enemy with 50% chance to apply Speed Down for 2 turns. This is typically good for Arena content besides general gameplay.

BITING COLD is her second active skill and is a decent one as well. This skill will do damage to ALL enemies with a value of 100%. This also has a 50% chance to apply speed down for 2 Turns.

FROST ZONE is her Ultimate Skill. This deals 100% damage (at max level) to ALL enemies. She will then throw her ice spear at enemies that deal 25% splash damage to nearby enemies as well. Another excellent AoE ability to have.

If you want to progress through the games’ content quickly, this is one of the top heroes to reroll for in your list of characters or heroes to reroll. She also has an S-Tier attack stat which is great for damage.

She lacks somewhat in speed, so I would highly recommend to build her up with some form of speed boost equipment to balance out the character. Other than that, a top tier character/hero to have in your team! 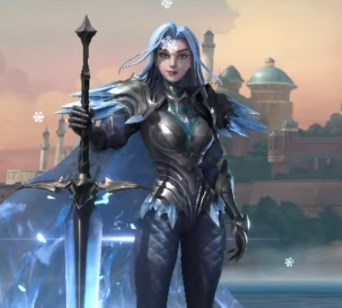 Tia is my next entry in the list of top character or heroes to reroll. As you can see, she is also a 5 star legendary, and a worthy one to be honest. Check out her stats first:

FREEZE is her trait ability and a great one also. This ability helps her to apply Frostbite for 2 turns at the end of enemies turn. If this stacks to 5, it applies Frozen for 1 Turn. Frostbite is basically a debuff ability.

this reduced speed of enemies by 20% at 4 stack (Basically Frostbite II) and leads into “Frozen”. Frozen stops the enemies and freezes it. The enemy is unable to attack and take 50% more damage from all sources. Attacks on the target has 50% chance to remove this effect as well.

CHILLING STAB is her first active skill. This deals 100% damage to 1 enemy and applies frostbite I (10% damage at 5 stack) for 2 turns. Now, I already explained how frostbite works in the above point. You can use this knowledge to disable a unit for several turns.

FROST SWING comes in as her second active skill. Deals 150% damage to an enemy and applies 2 stacks of “Frostbite” for 2 turns. As you can see so far, every skill is based in stacking and applying frostbite to enemies.

ABSOLUTE ZERO is her ultimate ability. Deals 120% damage to all enemies, with a 50% chance to apply frozen for 1 turn. This is increased to 80% if enemy is afflicted with Frostbite. The ideal tool to completely incapacitate the enemy in my opinion.

Good for PvP and a definite reroll hero to keep in mind! 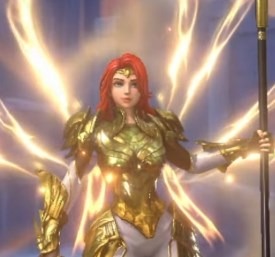 She will be my final addition to the list of top heroes to reroll in this game. Now, this particular hero is vary hard to reroll for. But totally worth the wait and grind to get her. First, let me show you the stats:

BATTLEFIELD COMMAND is her trait ability. She grants “Defence Up” to all team members 3 rounds at the start of a battle. Defence Up is basically a Buff ability granting +20% defence when it is activated. Ascension ability: if you manage to ascend her to the max, this grants you “Attack Up”.

This is also a buff ability that grants you +20% attack damage. Both of these are part of her Trait Skill. This particular skill with defence up grants you a head starts from the very start of a round. Hence getting her is considered so lucky.

THRUST is her first active skill and this one is also very effective. Deals 80% damage and removes 1 of their positive effects. So, it is basically a combo of damage and debuff at the same time. A massive advantage if you use this one as well.

VANGUARD is her second active skill. Deals 100% damage to an enemy and Applies “Defence Down” for 2 Turns. Defence down decreases enemies defence by -50% (Defence Down II). Another excellent debuff skill to have.

FULL STRIKE is the ultimate skill of this hero. Deals 100% damage to ALL enemies and grants bonus turn to all allies at the end of a round. The latter is the main game changer here. Granting an extra turn means more damage and debuffs to enemies.

A top contender for PvP/Arena content and in my opinion, the best hero to reroll for!

In conclusion I would say that definitely look for Evelyn followed by the other two if you looking for tier list of characters to reroll for. If you get any other character, unless it is a 5 star legend, skip it an reroll again!

That is all I had to share in this guide on the best characters/heroes to reroll for in Awaken: Chaos Era. Do leave your suggestions and thoughts in the comments below.

I also have a YouTube channel where I upload the latest gaming content for PC and Android. Feel free to check that out at your own leisure. Got specific suggestions? You can submit them here. Thanks for reading!