The highly anticipated Season 17 of Destiny 2, named Season of the Haunted, has finally arrived to all the players, and fans of the title have already started tuning into the game to explore all the new content that the new update has brought. One of the newest additions of Season 17 that many players are busy exploring are the Calus bobbleheads that can be found in the Derelict Leviathan.

Leviathan is a massive ship in Destiny 2 that was previously a part of an active raid. Season 17 has brought it back but in a Derelict state. Guardians are free to explore the ship and find all the Calus bobbleheads hidden inside it.

Here are all the locations of the Calus bobbleheads in week 1:

Reddit user ‘Volsunga’ has managed to find all the week 1 Calus Bobbleheads and has shared his findings in a Reddit thread.

As mentioned in the post, the first bobblehead can be found in the Royal Pools. In the back right of the room, there is a hole on the floor. Players have to follow the path to the end and the Bobblehead will be there on the ground.

The second bobblehead can be found in the Severance mission. At a certain point, players will have to use the wrench to disable the electric wall to get to the override switch, the Bobblehead is hidden on the landing at the top of the shaft and can be reached by climbing the tubes and edges on the right side.

A bobblehead can also be found in the Castellum and is in the locked door to the left of the landing zone. The door unlocks once a tier III boss has been killed.

The last bobblehead is located in the Pleasure Garden and can be easily found behind the big Calus statue. Check out this video that shows the live location for all of the Bobbleheads: 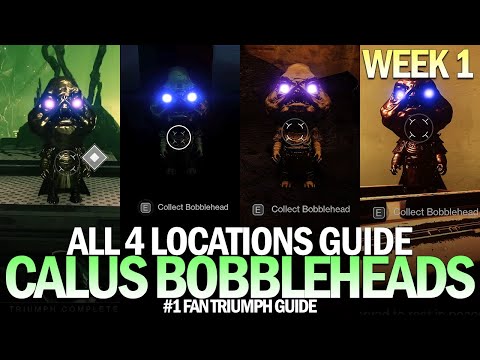 That is all from this guide on Destiny 2. Thanks for reading!

When he's not busy throwing CS:GO games, raging in DoTA 2, or grinding Black Desert Online, Fate can be seen binging Netflix for no less than four hours in a row.