Let’s face it. Boss fights in Resident Evil Village can be quite hard in Hardcore difficulty. Let alone Village of Shadows. But it is not impossible to do it. Many players all over the world have done it. So can you. Everything you need to know about how to beat the Fish-Man boss has been included in this guide. So give it a quick read!

How To Defeat The Fish Man Boss In Village of Shadows

So you have chosen to play in Village of Shadows difficulty in your first playthrough. Congratulations! You have unlocked for yourself a life-long path of hell, mixed with eternal frustration to the breaking point, topped with a never-ending tirade of choice cuss-words! This mode of gameplay is not a joke. Many of you can’t seem to get over the fact that beating the Fish-Man Moreau seems nigh impossible! Yeah, it can be quite frustrating and test your mettle but it can be done. Here’s how!

It is important to note here that the Fish-Man only gets stunned by your projectiles when his body is out. You can consistently stun him when he is exposed using an explosive. This fight is more tedious than it is difficult. But be certain of the fact that it is completely doable. For the Moreau fight, take as many bombs and mines as you can and spam him with explosives even if the weak spot is closed. When he pukes the acid rain stuff from his mouth, try to take cover with a view of his mouth and shoot at it with your sniper rifle as much as you can.

Use your pistol to shoot at his stomach when he runs towards you. Best to kite him on the left side with the high structure so that the acid rain doesn’t reach you here. I think we all need a defense upgrade here. Acid rain can also be avoided by going under the roofing. Try to maintain distance from him without running too far away. Get regular food upgrades. Health foods and block ones both will do. Don’t waste your ammo on previous levels. Keep everything you got saved for this boss fight.

Craft as many explosives as you can. Grenade Launcher shots, pipes, mines all come in handy. If you have the choice of crafting Grenade Launcher shots, take it. Be cautious of the scripted phases of which he has 3. In between when he uses his acid rain attack, use your sniper rifle to damage his head. The moment he says stuff like, ” I don’t want to die.. It Hurts So Much”, know that you are close. Even if you have no ammo, attack his weak spot with a knife. Stay on him, block timely and heal yourself. Use your shotgun and sniper rifle in the first scripted phase along with the explosives, including the exploding red barrels. Go all out with the grenade launcher in the 2nd and 3rd phases. 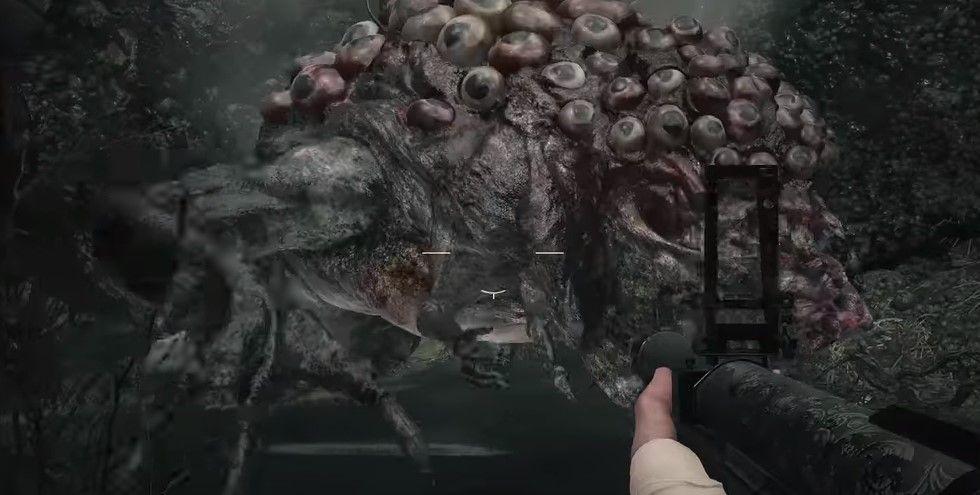 That should definitely do it for you! I understand that some of you may need a few attempts before you can clear this level. Very much understandable. In my previous posts, I had urged players not to take the Village of Shadows mode in their first attempt. The game is quite a handful in the hardcore level itself. Be sure to follow our guides on Resident Evil Village so that we can make clearing levels just that tiny bit easier for you. I hope you found this guide useful. Leave a comment to let us know if you appreciate it. Until next time, pals!