In this guide, I will be discussing a general beginners’ basics and guide for Revived Witch. These are some simple tips that I found during my time in the game that can help you out to get started.

I will be going over The best units or characters to reroll, some basic game mechanics and features, how to proceed with the early progression, and how to pair characters to make some of the best teams.

Feel free to let me know what do you think about the points mentioned. If you feel the need for rectification, do not hesitate to comment it down below. First things being, the rewards that we get. Warped Hymn Cynetia is gonna be the first character that we’re gonna get. She’s gonna be a single target AoE healer.

She’s gonna be really good early on in the game. So that makes the re-rolling process much easier.

I think these Cryolites are going to be used for something so save them up for later. We’ll find out more a little bit later, but mana is going to be really important for upgrades.

I just want to annotate that really quick.

Let’s go ahead and look at the characters now. Afallen, she’s going to be your premier tank. In this game tanks are very necessary.

I love how cute the art is for her and you also have someone like Luan. I’m just pointing her out because she’s the waifu that stood out to me. I love her animations also. Then we also have Ushpia who I think looks absolutely stellar.

Let’s go ahead and jump into the actual beginner stuff. We are going to be discussing here all the stuff on how to start and everything. So there’s going to be four UR heroes that you can collect at the very beginning. On this beginner pool, it’s going to be a 10 by 10 roll.

Eventually think of it like the Epic 7 reroll format, where you have 10 summons that you can do and you’ll be presented with characters and you’ll keep the ones that you want.

There’s gonna be beginner events for everyone going into the game as well but the reroll process seems to be relatively easy. They have a built-in re-roll with a 10-time summon essentially going over 100 times or at least 10 by 10. TLDR;

Characters to look for

So let’s talk about Afallen really quick because she’s really hyped up. She essentially generates a shield based off of her HP.

Then she takes all the damage dealt to all allies within the next 10 seconds. So essentially she’s gonna be the massive tank that you want.

There’s going to be a lot of things that keep her alive, at least with the barrier ability.

Then you have actual holy radiance. Deals magic damage 300 of the attack to all enemies, dispel their buffs and reduce their magic defence by 40 percent based off of Afallen’s magic defence for 10 seconds. So that’s pretty good.

And her passive, she’s gonna auto cast her holy radiance. So she’s gonna be triggering, more magic defence breaks over time. Honestly she’s the perfect character. She can go invincible, she can generate a shield, she has magic defence. 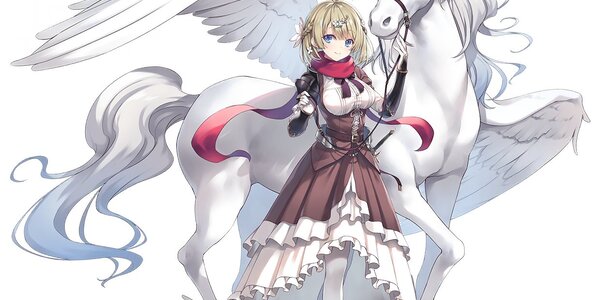 Then you have Caledonia. It’s going to be the physical variant. Just note that she is going to be providing heals on all allies on her Plume of Guard.

So pretty cool stuff and she also has this ability to reduce the amount of damage she takes based off of the HP that she loses. She’ll also get her debuffs removed.

Other Characters To Reroll in Revived Witch

So these two characters, namely Calidonia and Afallen, should be your first reroll characters to have. It’s not really worth it to get Akasha or healer Tuonel and the reason why you don’t want someone like Akasha is because she’s going to be a physical DPS.

In the very beginning you’re gonna get Cynthia absolutely for free. As you will see, Cynthia, she’s gonna be free and she’s gonna be providing a single ally heal plus an all ally heal over time on her Hymn to Bandage which is really cool. She’s more of your standard healer.

Right so the next thing is the way you enhance the dolls. All these characters you can see are all going to be dolls in some way, so that’s the nomenclature that they want to go off by.

Or you can just call these dolls your waifus because that’s more cultured.

When it comes to this, you want to go for mana essential materials, skill materials, and doll equipment.

Mana is going to be used for everything. So you’re going to want to essentially have this to 10K to easily upgrade your stuff at the very beginning of the game.

Just note that you only need two dolls or two waifus in the recommended levels to beat these ascension stages.

So just take note of that and you have your doll equipment that you can focus on later. Then you have your skill materials; you really don’t have to focus on gear and materials later on. Just focus on ascensions and your mana and levelling up at the very beginning. 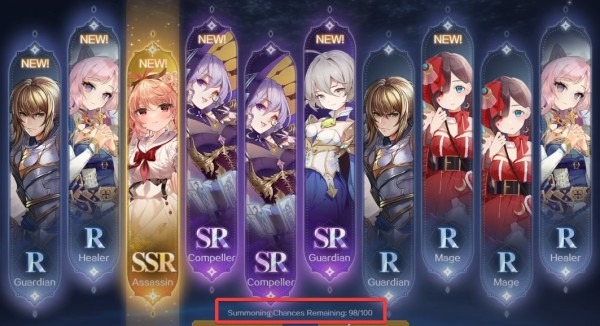 Then you have your rarities. So the top one, it’s going to be UR. I don’t think the EX comes out very easily, you probably have to do something crazy. SSR is going to be golden. Purple is going to be SR.

In case you guys are wondering what are the rates, the rates are: UR two percent, SSR eight percent and SR forty percent and R fifty percent. So this is kind of low in my opinion, hence we’ll see how it goes. Maybe they’ll have a fair system or better rates of drops as the game goes on.

And when it comes to actual elements of the game they are as follows; red is brimstone, mercury is going to be blue and salt stone is going to be yellow. There is also this Aether ability and this belongs only to the Witch, namely, the witch of the void.

I guess she’s going to be all-encompassing. She doesn’t really have an element per se and she has some damage reduction abilities.

I think she’s an interesting character and she is going to be of a mage variant. So Afallen’s going to pair with the main character very easily, another reason why it’s just recommended to roll for Afallen. 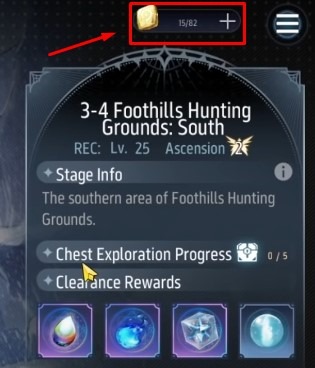 Each stage costs some stamina or “entry fee” to get into. If you skip mobs, some of these stamina gets refunded back to you. After you get them back, ideally put them in the “Dreamworld” stages and levels. I think these are for feasible than the ones that cost you 20 Stamina.

You can buy monthly cards too. There is going to be a pay-to-play exclusive character known as Celia. Just note that she is going to be physical oriented. So Afallen obviously will not pair with her.

Stamina usage is going to be important and again it’s going to be a mana essential material, skill materials and doll equipment. At the very last it is recommended to refill your stamina, in case you want to, to essentially beat the game faster.

I would make the recommendation to run a magic team just because it’s easier.

You could also run mixed teams, physical teams only, or physical and magical, it’s up to you how you want to do things. But the main compelling units or mage teams is going to be Mineer and compeller Amanami.

So Mineer is going to be a single target DPS. Obviously she’s not going to be good at farming and all that stuff and you have Aminami.

She sounds a beast, honestly she sounds a better healer than Cynthia in some ways. So this seems really cool that Aminami is in the space and Mineer just being the boss killer.

I’m pretty sure there is an equivalent in the physical space. But it’s just really hard to argue when you have those two powerhouses on the magical variants.

We will talk about the elemental line-ups here. There is going to be buff effects, so for example if all of the dolls on the main line are of the same element, you will get HP attack and defence plus 10%.

But if the deployed dolls and backups are all the same element, it’s a 15% buff overall.

This is something to look into, technically speaking, Tuonel, the healer or maybe even Cynthia, you don’t really need to align their elements in order to get the best heals. If you guys didn’t see it earlier, all of their heals are based off of their attack.

I’m not sure how that applies when things progress further but it’s just something to be aware of. Their heals are based off of their attack. So cool thing about Cynthia, she is salt stone, so she’s not going to pair with Afallen. Let take a point wise look at pairing of characters;

Which Units to Run

The thing that I wanted to stress on most was Afallen or Caledonia. Pick one of the two, get one of the tanks, do whatever you need to do and everything else will fall in line.

Except for these few points, you should ideally pick what suits best for your playstyle.

Except for some specific characters like Afallen and Caledonia, other are totally interchangeable in my humble opinion. Find the right mix of chemistry for you and progress forward in the game. I will sum it up to be more precise:

The rest is optional and depends on choice.

I think this game is going to be fun. It’s produced or at least published by Yostar, so that’s pretty exciting. The game looks amazing to me, the pixel art, the graphics.

Let me know what you think about the game as well. So, hopefully this guide helps you out. If you made it this far into the guide, consider dropping a comment to let me know your thoughts.

I also have a YouTube channel where I upload the latest gaming content for PC and Android. Feel free to check that out at your own leisure. Got specific suggestions? You can submit them here. Thanks for reading!