Brawlhalla is a platform fighter for up to 8 players online or local. The game modes include free-for-alls, ranked matches, and private rooms. Most of all, it is free to play! Hence you can play cross-platform with millions of players on PlayStation, Xbox, Nintendo Switch, iOS, Android & Steam! The game consists of 50 Legends and more to come and receives a lot of updates. One thing I personally love is the mechanics of the combat. If you happen to be a “PC guy” like me, then you would need the perfect controls to stand a chance in the battle arena. In this guide, I will show you the best settings on PC/Keyboard for Brawlhalla. Keep reading…

To initiate the changes in the first place, click on the wrench icon on the top right of the screen. Then click on Controls from the drop-down. Now, select Keyboard B from the list and click on Change Controls. Note that by default, the key is X so you can also press that to change the settings. Now simply do the following: 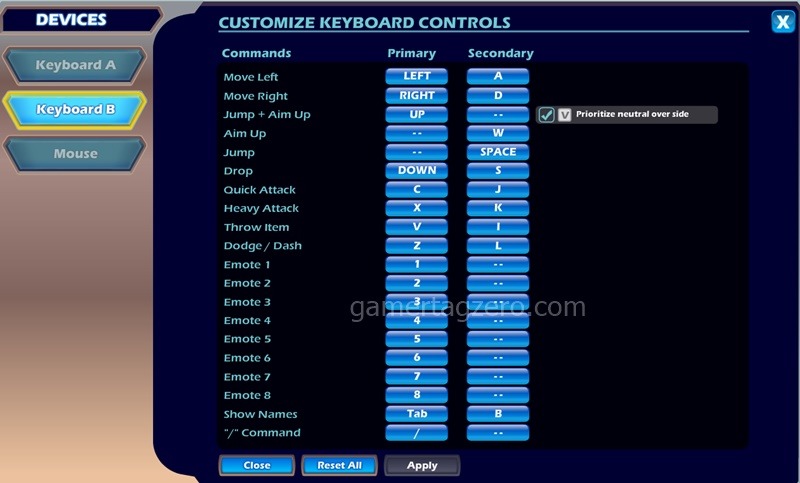 You should ideally use The Secondary Controls to play the game optimally. Also to do proper Neutral Airs Tick the box that says Prioritize Neutral Over Side. The hand positioning is obvious, but just to be clear, the left hand controls movement using W, A, S, D, and SPACE. The Right-Hand stays on I, J, K, L for actions such as attack throws and more. I will not be discussing the in-depth movements since they are very well covered in videos. You can look one up and learn from that as well.

Some Tips and Tricks

I like to do simple two-step combos and follow them up with dashes to pursue the opponent. I am a newbie to the game hence I can only share intermediate things I try to do. Since these settings helped me a lot in winning games and securing good scores I decided to let all of you know as well. Usually, play with a character whose animation is comfortable to deal with. I play with Zariel for most parts so that I can utilize these binds well.

If you play with someone like Onix, you need a higher skill level to better control the cannon and gauntlets that come with the character. a Light combo followed by a dash then a heavy attack does well for me here. I use the SPACE in quick succession to do this. With the above settings, I find Spot Dodging to be quite easy to do. I tried the game with a HORI Fight Stick but I find it much easier to play with a Keyboard.

Since This is on PC you can try different Controllers to try the game out as well. In Mobile Devices the options are limited. Hence you may do well with a PS, XBOX, or even a Fight Stick. I found Keyboard to be the most consistent for me. This combined with the above settings has made my journey in Brawlhalla fairly enjoyable so far.

About Brawlhalla and Features

Brawlhalla will always be 100% free to play with no pay-to-win advantages and no in-game purchases to keep you from the action. Everything you can buy with real money is cosmetic (such as character skins, podiums, and KO effects) and none of them affect gameplay. The Legend Rotation of nine free-to-play characters changes every week, and you can earn gold to unlock more Legends by playing any online game mode.

That would be all from this guide. All suggestions/queries are welcome in the comment section below. I will be coming up with more Brawlhalla Content so stay posted with this site to know more about it. Thanks for reading!

Contents hide
1 Best PC Keyboard Controls/Settings for Brawlhalla
1.1 The Controls
1.2 Some Tips and Tricks
1.3 About Brawlhalla and Features
1.4 Is Brawlhalla Pay-To-Win?