How to become a Western Style Democracy in the game in the most efficient way? 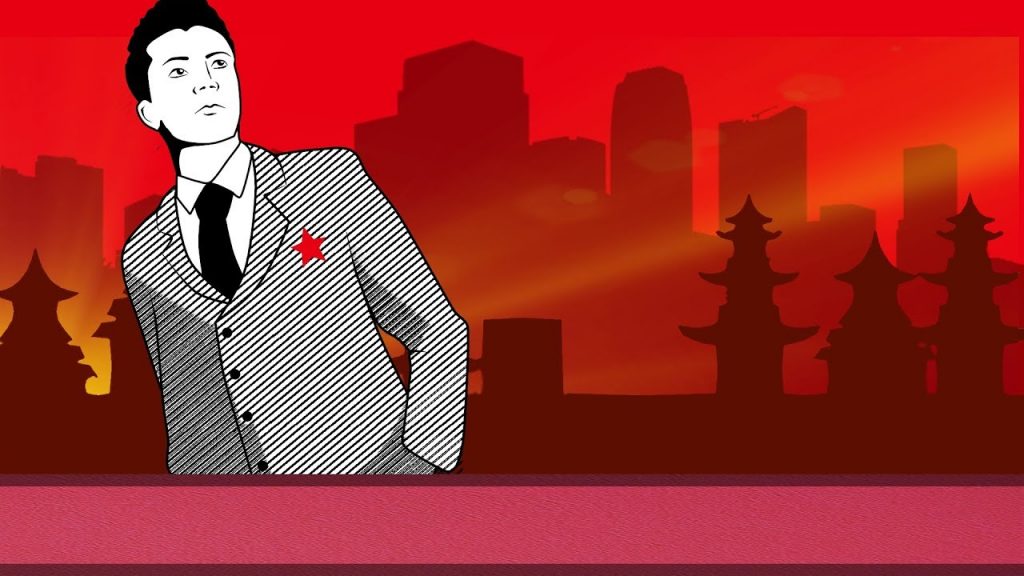 This game is creating quite a buzz, and most of the gaming community is loving it so far. With longer play sessions this time round ( nearly up-to 2hours) you are in for quite sometime in this game. Also the fact that you have to play this game over and over again, and still not get bored is a great achievement for this game.

If you spent some time in the game, one thing you would want to do is Reform yourself. More specifically the Western Style democracy. In this guide I will show you, what is the most efficient way to do that.

Before you even move a single day, there are essential things that you need to do to get a good start in the game. Making money early on is pretty important to just basic survival and then snowballing into a first world country in the late game and even surpassing the Japanese. The first screen you should look at is the budget; I would advise you never using envelopes for party members, as this raises corruption and it isn’t hard to control the party without the use of bribes. As well, I will not be making use of your army in this game, so I don’t usually put much if any funding into this branch, although I will be allocating a small amount of funds should you chose to. 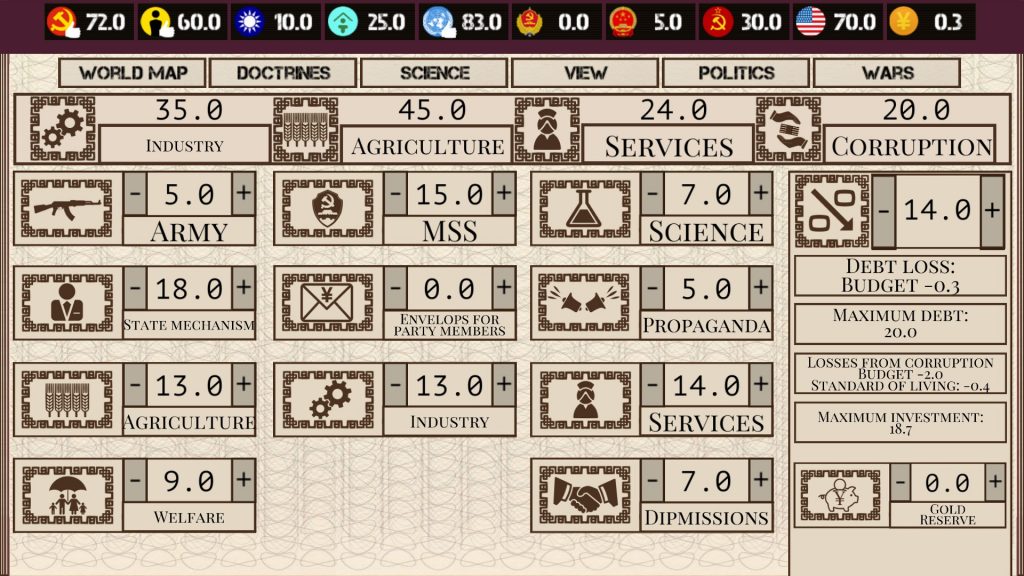 This is not my usual system but having some money in the military will let you use it if you want to go to war with Vietnam or India later on in the game, I will not be doing that in this game. At this point, you should have one fund left or one million Yuan. Begin researching the first industrial technology, “Improved conveyor production.” This will let you kick start your industry, which is essential for finding trade partners; this will be critical when the USSR embargoes you.

The next important step is the political screen; it is crucial you start this before the game ticks a single day as to avoid events from triggering investigations on people who you should be appointing ASAP. Support Zhao Ziyang four times, appoint him Minister of Foreign affairs, aka MFA. This will lower your dip rep quickly and let you start trading with other nations asap, as well it empowers who is going to be your future leader. Appoint Ji Dengkui, or any “thrifty” person as his replacement in the South; this will boost your income. Appoint Li Xiannian, or any “thrifty” person as the Eastern leader; this will further increase your income.

At this point, you should have 300 thousand Yuan in your budget, which is fine. You will be making a pretty good amount soon to recover what you just spent.

This part is pretty simple, do not follow what Mao commands and act in opposition to him, we want reformers because two of them are “thrifty”, the best trait “Hard Man” second best. As well, following the orders of Mao will boost the power and our relations with Radical Leftist, something thing which is detrimental to our goals.

– Stand up for (Deng) Xiaoping

– Do what you please in Thailand, I will not be doing anything for this session, but you can reallocate funds from the army to start a civil war or do whatever.
Withdraw material and prohibit his publication, at this point bite the bullet, legalize liberals and start supporting them
Call everyone to go away and cordon off the rest until they leave.

So at this point, you are very unpopular with the party, they do not like your views. If you use the same budget, I provided in the early game you should have about 11 agents before they try to overthrow you, meaning that you can beat them when it comes down to it. Don’t bother looking for whoever is the traitor; it is almost impossible to find from my experience due to your low party approval. You should also have about 3.3 million Yuan in the budget by the time the conspiracy fires, it should rise to that number just before it triggers. When it fires arrest them, this cost you, ten agents.

Let the game run for a little time; you should have at least 5 million Yuan to fund recovery and better protection after the major earthquake, use it, it helps party loyalty and public views. Mao will die shortly after this, follow his wishes and let the funeral commission decide what to do with him; this will boost reformist in the political tab a bit, and arrest the Gang of Four, their event will fire soon after Mao dies. You will lose one “thrifty” leader but gain two instead. Appoint Chen Yun as his replacement om the East and put Deng in the West.

Support the rebellion and avoid Cambodian–Vietnamese War by supporting the rebellion, I would not recommend helping Pol Pot or Cambodia in general as this will put in in opposition to the USSR and you want to such as much trade out of them as possible. Dip support Vietnam to buy a little more time to trade. Boost industry funding up to 20 million Yuan in funding.

At this point, you should be in a situation like this, with slight differences depending on if you decided to support anything in Thailand to Cambodia. 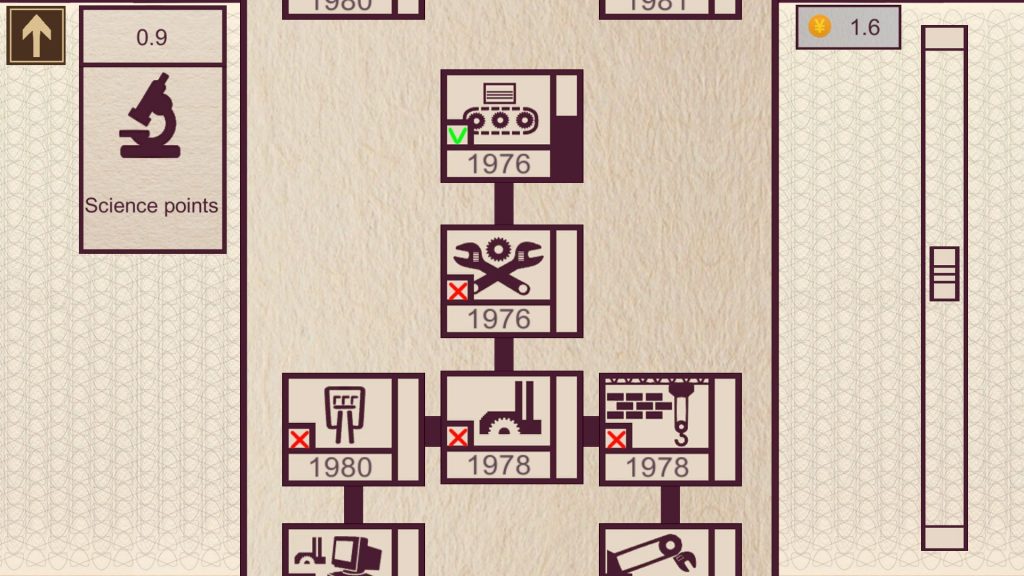 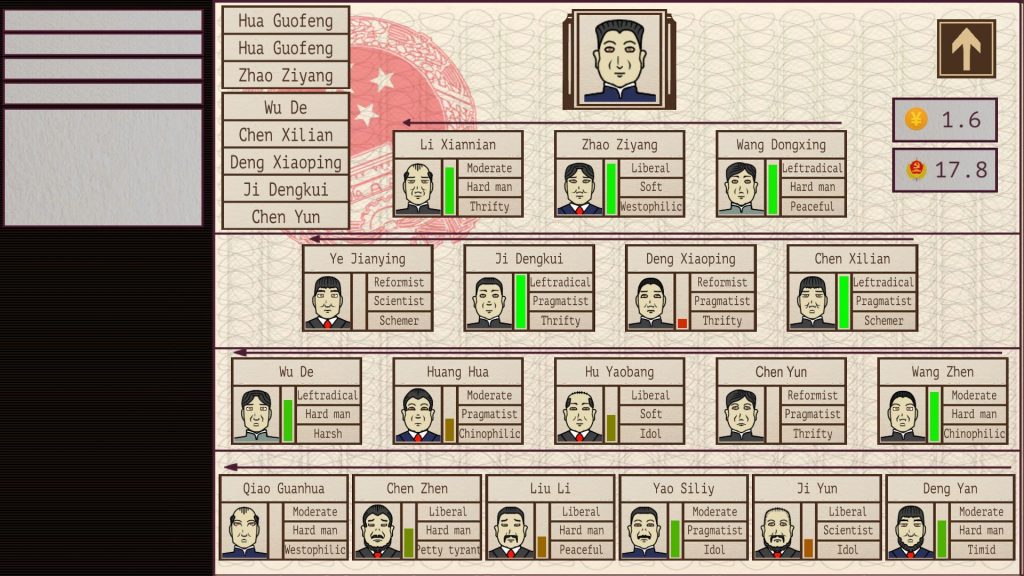 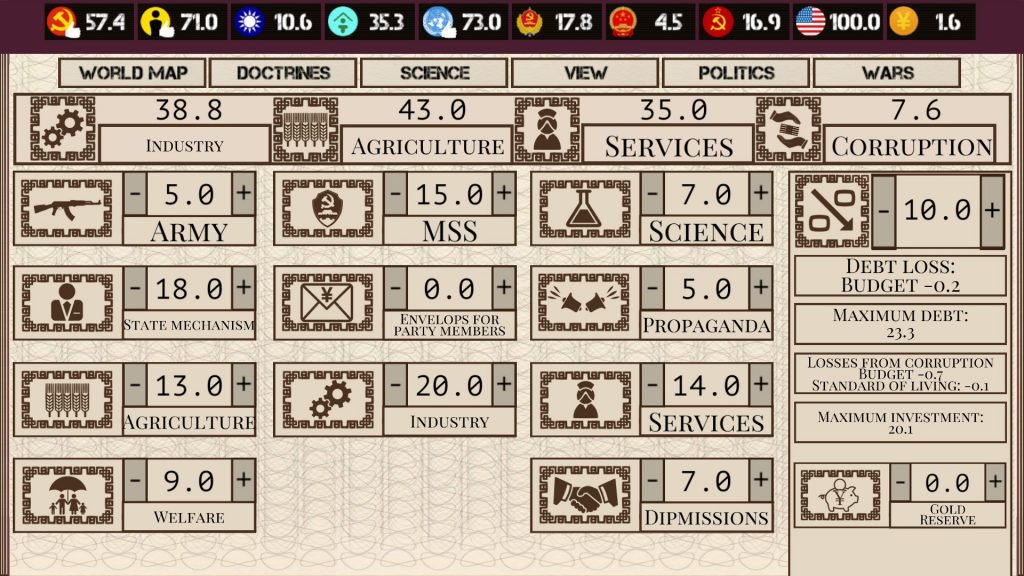 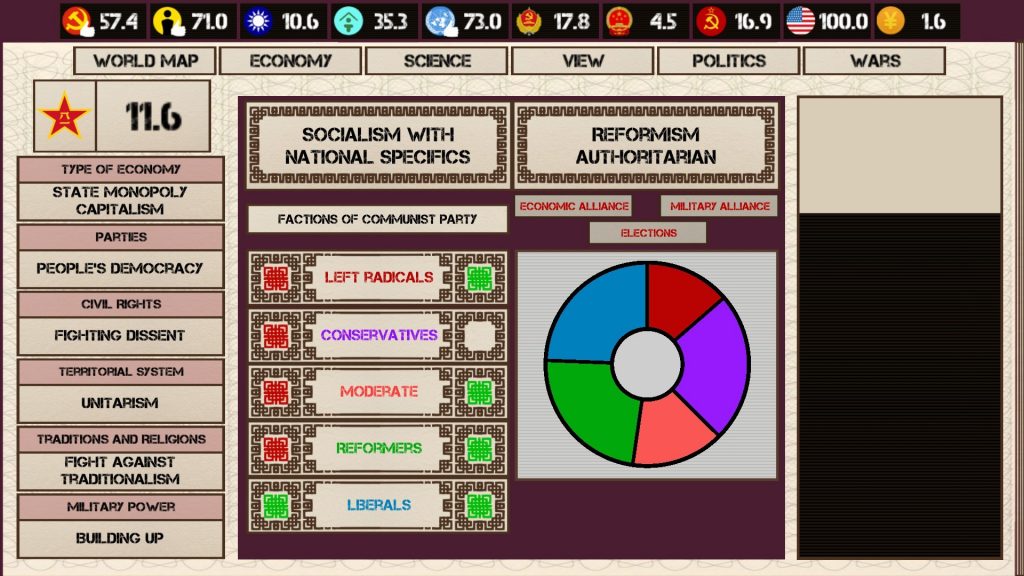 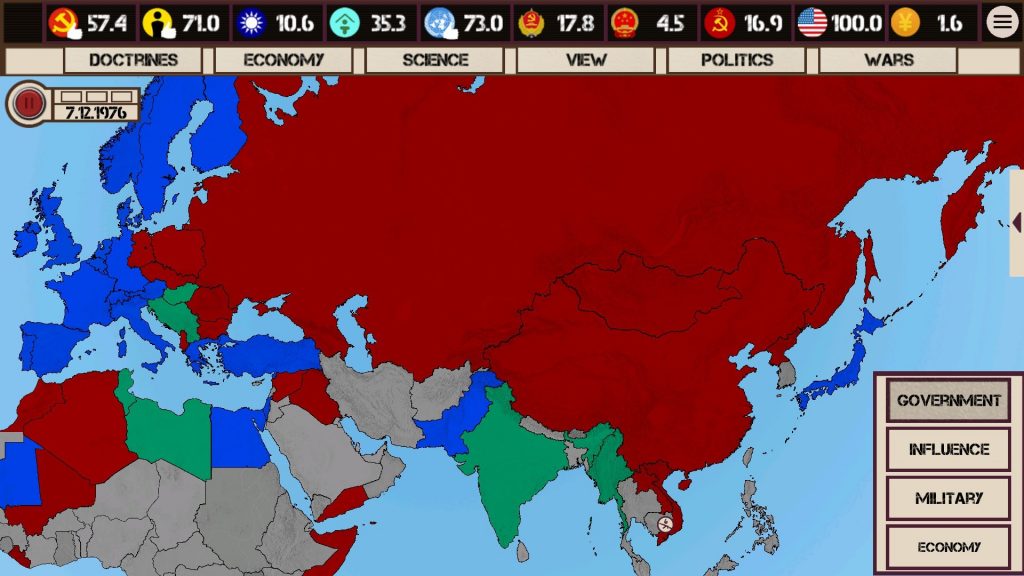 Reformist and their games.

The game has run a little bit between now and the last events, which is fine. You should have an option for from an alliance with the Reformers, and you should take it. After doing this appoint Deng as CMC and the reappoint him to the West. Boost research funding to about 13 million Yuan and keep investing until 15 million Yuan while you are waiting for the fund to gather to do that the event Commission on “Solution” will fire and you should appoint Peng Zhen and Zhao Ziyang. The India elections event will fire at this point; I chose not to support anyone as they will trade with you after the elections, but you can do as you please here. Reallocate funds from the military or science when needed to do what you want, bring them back up again soon.

The event “Back to the roots” will fire at this point and you can only take one option, thankfully, it is the one you want. Get the reforms rolling; money will start booming soon after a few more events. Sadly, first, we must take a hit. The USSR has closed their market to us; we must accept this and ignore them for now. Right after my first tech finishes, begin the next industrial tech.

A Crescent in the Eyes will trigger soon after; I form relations with the new government to get the US to like me more and get another trade partner. You can also sign a friendship pact with the French. The Egyptian event will fire soon, it is expensive and will require some, but you can help if you want, invest beforehand. The other industrial tech will finish soon after, start on the first farming one.

Rhe Burmese Road to Socialism will trigger, send them three million Yuan to start trading with them as they will make up their investment in about a year or so.

Now here is the significant events to start reforming, because of your pro-reformist actions you can work with Deng by selecting the Agree with their Demands option in the Cat event, I am unsure if Deng can give up power to liberals, so let’s play it safe and work with the Reformist here instead of fighting them. Support whoever you want in Iran, it doesn’t matter too much. Pick the third industrial tech after the next research is finished. Soon after you can open the SEZ, Open it and part of the rest enterprises, and then turn around and trade with the Philippines and collect investments from France and the USA.

Go to doctrines and use the money you have to declare a secular state, or collect the funds and then do this, I have ensured that if you follow the guide, you will have plenty of buffers, I had almost eight million Yuan after I did the first reform. “End of Revolution” will then fire pick the “civil liberalization” as this will make it cheaper later one to reform that field. You can also trade with Iran at this point. Continue to research industrial techs.

Once the year passes collect investments again from France and the USA and fully liberalize civil society and then privatize farms when the event fires. Research the other farming tech and sign CIA and Friendship agreement with the USA.

The first elections and the last stages

At this point, you are nearly ready to declare open and possibly free elections, but first, the Mongolians are throwing a fit, so select whatever option you please, remember that spending money at this stage delays democracy. Once the year ticks over to 1980, again collect investments. At this point, I was able to switch to a mixed economy and multiparty democracy. I was able to win the elections without cheating but feel free to if you don’t think you will get a 2/3rds majority. At this point you are home free, play as you want until 1982, during that year you will get an event that will mention that you will begin a departure from Mao, make sure you select the one that moves you away from Maoism.

If a few years you will get the student protest event, Resign your position as leader of the party, and then offer full liberalization to the crowd without compromising after you resign and at that point, you are genuinely a liberalised state.

That will be all for this guide.

Scroll back to top