I am here with a new post on the best weapon series analysis in Phantasy Star Online 2 New Genesis. This game has become extremely popular among fans in a short amount of time. It promises to be a worthwhile experience post-release and has a lot of players talking. Let us check out the contents of this guide without further ado. 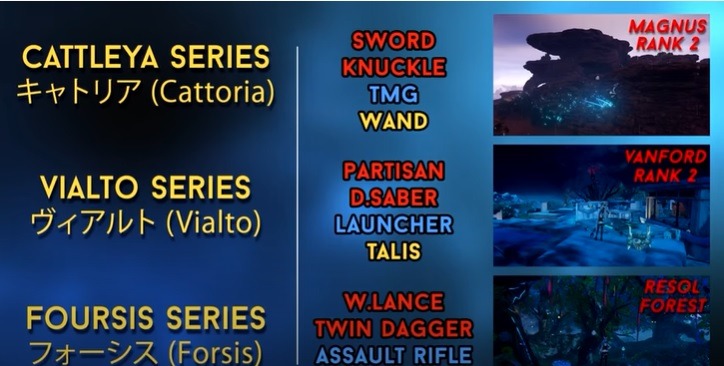 Take a look at the image above. This chart lists the Cattoria series, the Vialto series, and the Forsis series. The Cattoria series has the Sword, Knuckles, Twin Machine Guns, and the Wand dropped from Mt. Magnus Rank 2. The Vialto series contains the Partisan, Double Saber, Launcher and Talis dropped from Vanford Research Station Rank 2. And lastly, the Forsis series covers the Wired Lances, Twin Daggers, Rifle, and Rod dropped from Resol Forest. No Rank 2 for Resol Forest because it is already Level 15 by default.

For the uninitiated let me just say that a Rank 2 area unlocks after you complete the Main Story Quests in the game. Here the enemies are leveled up more, for example in Rank 2 Mt. Magnus enemy levels are level 15 compared to level 5 in the Main Quest. There is one more series that covers all the 12 weapons which are called the Resurge series. 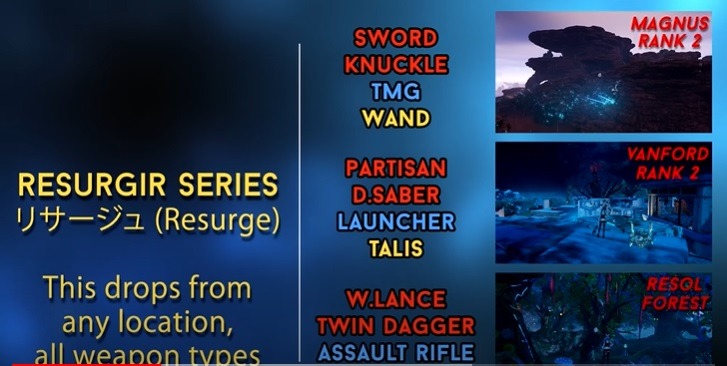 It drops from all the above 3 areas but at a lower rate. Now I am going to explain each of these weapon series’ briefly.

Let us first talk about the Cattoria series. Basically, you gain an attack bonus which scales according to your current HP and maxes out at 5% extra damage when you are on max HP. Its really nice that this covers all the weapons that it does because these weapons happen to have the most defensive capabilities and absorb a ton of damage.

Out of all the options, I feel what works best is the Hunter Main or the Hunter Sub because if you are using Fighter-Hunter, you have the Hunter Flash Guard which reduces damage taken and also other stuff. Gunner Hunter is also a very powerful combo along with Attacker Hunter. This makes you a great Tank with solid defenses and health which means you can take as well as deal a lot more damage.

The second weapon series is the Vialto series. This according to me is the most underwhelming of all because all it gives to you, in terms of utility right now is 10% Natural and Attack PP Recovery. There is really nothing much to talk about here.

The weapon series I recommend for these 4 weapons is the Resurge series. This weapon series is available for all types of weapons so you will have more flexibility with them. What the Resurge series does is, when you successfully evade an enemy attack with, say, Step Dodge, you gain a 15% Crit Rate for 30 seconds. Crit Rate is of much significance in PSO 2 New Genesis because it not only does the max number your weapon can hit but also deals 20% extra damage to enemies.

This weapon series is definitely one of the contenders to become the best weapon series in PSO 2 New Genesis. The other weapon series which is a contender to be the best, though for completely different reasons, is the one I am going to talk about next.

This weapon series gives you a damage reduction shield that gives you protection from 40% damage taken when you are in full health. However this only works for a single hit. If you take even a little damage and your health reduces then you won’t have this shield. So why is it so powerful?

In PSO 2 New Genesis bosses hit extremely hard with one-shot attacks. And you have easy access to health gain. This shield helps protect you from these attacks and you can easily slip in your own attacks through to these bosses. Trust me, this shield did save me countless times in boss fights.

Hope this guide helps you with your selection of weapons in Phantasy Star Online 2: New Genesis. I hope I was able to explain to you these weapons better. All I can say to you is good luck and may you get the best weapon drops and really enjoy the game! Stay healthy and have fun. I’ll be seeing you very soon.