This guide contains the ideal map settings for the game Humankind for the hardest difficulty level. The outlined strategy has been chosen to compensate for the bonuses given to the AI, hence the following map settings will be optimal. You can however beat the game on Humankind difficulty in a variety of settings. Check out this guide to know more. 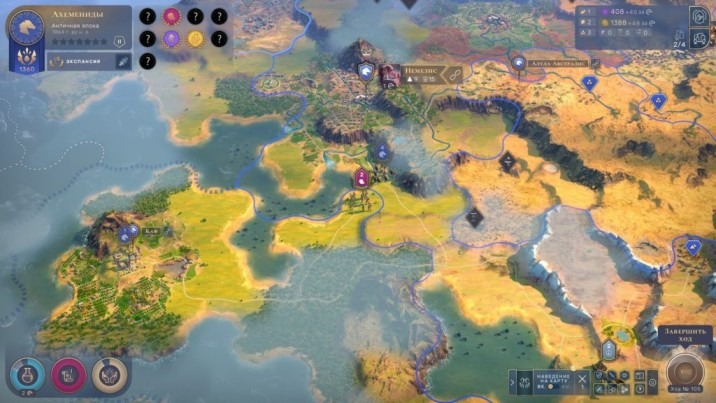 The World Map Size should be Huge. The actual strategy is dependent upon the number of players, but generally speaking, the larger the better. Having a large amount of landmass allows you to expand more before you face war. Minor cultures can also spawn more easily, which gives you a more varied way of claiming territory. Thus, if you’re ever compelled to choose a less potent culture (such as the merchant culture), you can still use the money to occupy territories.

The world shape should be Large Pangea. This provides ease of scouting and procurement of would-be trade partners. The deep and shallow waters in this game often bars the player from interacting with other continents until Cogs are researched.

Land Percentage should be at least 70-80%. Similar to having a large Pangea world shape, this factor is important so that enough ocean territory is available for ship trading routes to be easily accessible. Not having enough water can easily make you become landlocked and unable to access trading partners to offset the stability bonuses.

Cold/dry territories tend to give you smaller food yields, which is what you should care about most early. The bonuses give more impact on terrain with smaller yields. Dry grass with +1 food can soon become +4 food with the AI bonus, which is a +300% increase. Prairie with a +2 food becomes +5 food, which is only a +150% increase.

You should go for a flatter elevation. Flat elevation increases the rate of scouting and the eventual discovery of potential trading partners. Flat elevation has the tendency to decrease flat industry yields which makes the AI FIMS bonus relatively better.

Game Speed should be ideally Slow/Endless. Though most of my games have been played on standard speed, I’ve observed that the slower game speeds tend to be easier. A sample size this small, consisting of only a few games, however, is difficult to make an absolute recommendation on, but I just thought I’d mention this.

HUMANKIND™ is a historical strategy game, where you’ll be re-writing the entire narrative of human history and combining cultures to create a civilization that’s as unique as you are. Combine up to 60 historical cultures as you lead your people from the Ancient to the Modern Age. From humble origins as a Neolithic tribe, transition to the Ancient Era as the Babylonians, become the Classical era Mayans, the Medieval Umayyads, the Early Modern era British, and so on. Each culture will add its own special gameplay layer, leading to near-endless outcomes.

Face historical events, take impactful moral decisions and make scientific breakthroughs. Discover the natural wonders of the world or build the most remarkable creations of humankind. Each game element is historically authentic. Combine them to build your own vision of the world.

Thank you for having the patience to read the guide. If you want to share your views regarding it then you can leave a comment. I will be back with more guides in the near future. I hope everybody is keeping in good health and spirits. Take care of yourself and have a great day!