One of the key aspects in Konosuba FD is knowing the elemental weaknesses/damages for each element. Knowing this will help you build a better team, deal more damage, and clear stages in fewer turns. This game is similar to some other games that involve elemental weaknesses to exploit. If you jot this down, I don’t think you will have any trouble in clearing tough stages later on in the game.

This is where this guide comes in. This shows you the elements each of them is strong against and weak against. I will also be giving a brief explanation for each element so that you know what you are dealing with. There is also an easier and shorter way to remember this. Let’s take a look.

To start off with, The game has a unique system of elemental traits. The “Light” and “Dark” elements are strong and weak against each other. they are, however, independent from the other five elements so keep that concept clear while you use the characters. Here is a pictorial depiction of the same:

The other Five elements have a particular cycle amongst them. If I try to put that in words, It is Fire > Wind > Earth > Lightning Water > repeat. The way it goes is fire trait has resistance to wind and deals more damage to wind elemental characters, hence wind will be weak against fire. The rest of the order goes the same way. The pictorial depiction of the given elements are as follows:

Here is a more clear cycle to follow which will help you remember it more clearly: 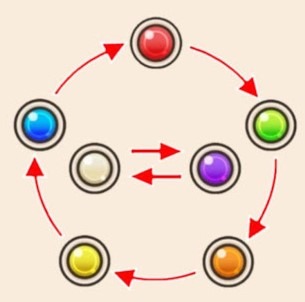 There are also types of attacks that are separate from these elemental effects. Sometimes, they work well against certain enemies so keep that in mind also. Examples of that would be Physical and Magical damage combined with elements. Take note that there are also dual elemental cards. Some examples of that will be Light/Dark, Fire/Water, Water/Light, and so on!

Traits are the buffs you get in the game using either elements or types of attacks. Generally, Elemental Traits are more powerful than Type Traits. The higher you go up on rarity, the more powerful the trait becomes. Traits only apply a boost to the overall element of the character. if your character is elemental it will do more DPS than a Type Trait character. There are also special traits that increase your super DPS, duration, and so on. They are not pure damage traits but help you in buffing existing skills.

Healing, Damage reduction, Dual Special Traits are some other examples of unique traits that are a combination of different elements and/or types of attacks. For example, Physical Up + Super Gauge Fill Rate Increases Physical DMG + Super Gauge of the character. Physical Up + Regen Increases, Physical DMG, and applies a healing per action of the character. You will find out more as you play more and explore unique styles.

Elemental Weaknesses are just a part of the vast combat system of Konosuba: fantastic days. If you want to know other aspects of the combat system, do let me know in the comments below. I will try my best to make a separate post about that. Since each system is so vast, I did not put it up in a single post to avoid confusion. I hope this post has helped you in some way or the other. I also published a beginners’ guide for Konosuba FD. Do check that out at your own leisure if you want. Thanks for reading and I will see you with a new one!