Welcome to this is a brand new post on Monster Hunter Stories 2: Wings Of Ruin. In this guide, I will be explaining to you all the 6 categories of weapons in the game and also revealing the battle tips and gameplay mechanics that work best with them. So go through the full post here and if you find these facts useful, please leave your comments for us. Let’s jump into the world of monsters! 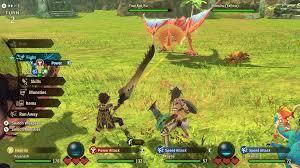 In this guide I want to talk to you briefly about the weapons in Monster Hunter Stories 2: Wings Of Ruin. I am going to share with you details regarding them and how to use them effectively in battle. For the most part weapons and combat in this game are relatively simple and self-explanatory. But some aspects of these weapons are told to you in passing so don’t bother too much if you miss them. I have described all the necessary stuff for you in this guide.

Now let us begin with the Weapon Types. In Monster Hunter Stories 2, there are 3 different categories of weapons and are Slash, Blunt, and Pierce. Each of these categories has 2 types of weapons included in them. Sword + Shield and Greatsword are the Slash types. Hammer and Hunting Horn are the Blunt type. And the Bow and Gun Lance are the Pierce type. You can carry at most 3 weapons at a time so I would recommend you carry one from each different type.

During combat, you can press X to bring up the weapons swap menu or you can go from Skills —> Swap Weapon, that way. Since different monsters are weak against different types of weapons, it is best to carry one from each different type to give you the best chance in battle. While fighting, you should take a look at the icons above the monster’s head that indicates which weapon type is most/least effective against that particular monster.

In combat, as you will go along, you will acquire Kinship Charge and when you use your Weapon Skills, you will see that some skills have higher meter requirements than others. However, you should also note that some weapons also have additional requirements and these are specific to that weapon type. Now let us discuss each of the specific weapon types. 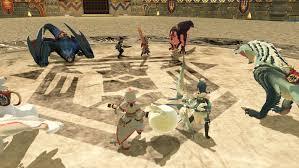 Starting off with the Sword and Shield, a slash-type weapon you will find that this weapon is the easiest to master and it does not have any additional requirements. Sword and Shield’s skills draw from the Kinship Gauge. Use your attacks normally and when the meter is full you can use your skill attack to deal more damage. When you level up and have more equipment you can use a wide variety of skill moves. Sword and Shield also allow you to use some defensive moves like block and parry. But in combat, it’s pretty basic. Use your skill moves when the meter is full and that’s that.

Things are a little bit different with the Greatsword. The Greatsword has a charge meter with 2 blocks. To use your skills you will have to fill up the Kinship meter. But to use your more powerful moves you will have to use Charge attacks. Using charge attacks will fill up the charge meter. Performing the basic charge move will unlock 1 block. Following this, you can also use another charge move in sequence to add one more block, or you can use the 1 block to make a skill move. Some skills can be used only with 1 block while some skills require both the blocks to be full.

The Hammer is a Blunt weapon but performs in tandem with the Greatsword. The only difference is, it has 3 blocks compared to the 2 blocks of the Greatsword. Winning a head-to-head, using double attacks, and winning a clash will fill up the meter. This unlocks your special moves with this weapon. All special moves have different charge requirements. Some moves will work only with 1 charge block while another may consume all 3 charge blocks. Being a Blunt weapon, Hammers are good at breaking parts or you can simply follow the on-screen prompts to use whichever attack suits you best.

Moving on to the next Blunt weapon type, the Hunting Horn, this weapon is also pretty simple to use. You have no additional gauges or meters to worry about. The Hunting Horn can be used to gain buffs and also support your team. Its attacks are pretty basic and within your skill menu, you can see all your skill sets. Some horns can even heal so this is an added bonus. Similar to the Sword and Shield the only thing you need to bother about here is your Kinship Gauge. When this gauge is full you can use your skill moves.

Let us now talk about the last category of weapons, the Pierce-type weapons. First up the Bow has a couple of interesting properties. As you are familiar with Monster Hunter Stories, you will know that this one here uses different special Coatings which come as skills in this game. In the skills menu, you will see that different skills like Power Coatings( for Power Shots) or Sleep Coatings(for Sleep Shots) are available. The Bow can attack normally. It also has a zero-cost charge move that consumes a turn but builds up your meter which can be used to unlock powerful moves.

Once charged you have access to the bow-specific shots, either Rapid, Pierce or Spread according to the bow you have crafted in the menu. Following a charged bow shot, you can also sometimes perform a Power shot which is kind of like two shots in one. This is there to sort of makeup for the lost turn while charging. Rapid-fire shots are high-power single shots, Spread shots will hit all opponents and Pierce shots will attack specific monster parts. Apart from that, your Coatings can be used with Charged moves as well as Kinship Gauge, but using them with charged moves will increase their potency.

Then finally we have the last weapon type which is my favorite type in the game, the Gun Lance. This one has a Shell Meter which accrues charge with each turn. Landing a critical hit, winning head to head or clash will also give you shells. The number of shells will determine which skills you have access to, just like the other weapons. Additionally, if you win a head to head using a skill, it will give a huge boost to your kinship gauge.

When your gauge is maxed out, instead of mounting your monstie, you can use a very powerful attack called Wyvern’s Fire which will consume your entire Kinship Gauge but not your shells. Your other skill moves require shells but cost zero kinship gauge. Unlike the other weapons, here you can use all your skill moves if your 8 shells are full. So even if you have 8 shells you can use a 2 shell attack. So this weapon has a lot of explosive power and also quite flexible and fun to use.

So that my friends, is a quick overview of all the weapon types and how to use them. If you want to read more such fun guides on Monster Hunter Stories 2: Wings of Ruin, then please do follow our page. Be sure to leave your comments and hope you enjoyed reading this guide. Let us know how you are enjoying this game and also using the different weapons in combat. Have fun, take care and see you next time!