I have also explained clearly why I think a culture deserves the place it does. So check out my guide on Cultures in Humankind and decide for yourself if I have done justice to them. 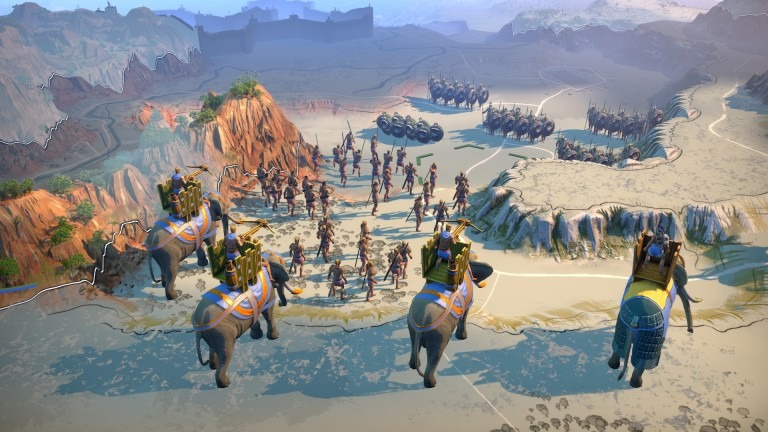 The Egyptians give a huge industry boost that will help carry you through all the eras with -10% district cost.

Their Emblematic district is quite remarkable with a lot of Influence and Industry being generated. Moreover, their potent unit is a great replacement for the Archer.

If you manage to get hold of the Pyramid of Giza then it’s almost a sure-shot win against the AI.

It’s no surprise that AI tends to favor the Harappans when it comes to the Ancient Era. It is an incredibly outstanding culture.

Firstly, Agrarian Affinity is broken and this generates huge population growth while your neighbours are denied. The Emblematic District is highly effective as rivers are incredibly good in the early game.

The Irrigation and Watermill infrastructure will make the cities founded on these rivers extremely prosperous.

Moreover, the population is very important in the early game, as they will generate huge resources from districts and can be used to build military units.

Thus, an effective strategy for the Harappans could be to steal the neighbour’s population, preventing them from raising an army, and then rushing them with their own army.

They are not considered as a militarist culture as such, because they lack bonuses to make their units better. But they beat others in the numbers game, especially early on, with their special unit, which is very effective at rushing.

The best culture for people who want to show aggression. Their legacy trait gives +1 Combat Strength to all their units in the Ancient Era and the units are also cheaper.

Their Emblematic District is the best thing in the early game to handle Stability and generate tons of Influence. This culture is a bit more inclined towards defense rather than offense.

But with all those bonuses can be extremely deadly.

Their unique unit has a shock and awe effect while attacking during the first round, which makes them very effective at overcoming attackers and defenders alike. The only downfall is that being aggressive is a situational thing.

Their legacy trait is outstanding and allows you to deal with stability easily throughout all eras. For every 6 garrisons in the early game that your competitor builds, you will only have to build about 4.

Plus, their Emblematic Quarter is also effective at dealing with Stability while also generating Science. It can even be a good alternative to Babylonians if you are in a Mountainous area.

The problem with their Emblematic District is that you can only build it adjacent to other districts, like regular ones.

Thus its placement can be a bit tricky to take advantage of those mountains and special tiles. They are definitely not S-tier material as they do not have the most powerful Industry or Food bonuses.

The Unique unit is also not that amazing.

A strong Food and Influence-based culture with their Emblematic Quarter. Their legacy trait is a little bit on the weaker side. Their unique unit can be effective in Forest Tiles.

This is an expansionist culture with a very handy legacy trait that will carry you through the eras. The +1 Land Movement Speed is too good on Huge maps and is effective in more areas than simply warfare.

The Ransacking bonus means that you need lesser time to ransack the outposts that prevent the expansion of competitors. Plus their unique unit is highly mobile and can ransack a little bit more (though not a huge bonus) of gold.

Finally, their Emblematic District works as an Influence generating garrison. It can be purchased in Outposts that do not have an influence price.

Note that it can quickly spiral out of control with more and more influence being generated. It’s probably the best influence-led culture in the Ancient Era.

However, it’s not an S-tier or A-tier culture as those bonuses will be rendered useless if you don’t have enough neighbours. Also, there is nothing much to boost your economy apart from Influence.

Merchant cultures like the Nubians are fairly weak compared to the others. Money isn’t that useful in the early game. Sure you can rush production in some cases but that is extremely costly.

1 turn of production is equal to hundreds of Money. The only way Money is effective is by influencing independent people.

Influencing them and then using their armies for hire may be the only possibility you can defend yourself against other aggressive cultures.

Their legacy trait is quite good early on and will generate tons of gold but almost totally useless in the late game. It generates at the most 250 gold when you produce more than 20k.

Their special district has the quality to act as both a Market Quarter and a Makers Quarter. Thus it exploits both Money and Industry.

They have moderately good Archers that can benefit only from steep terrains so as to prevent being attacked back by other ranged units.

This culture has a very weak Legacy Trait that will only be effective in the Ancient Era but afterward completely useless.

There are less than 100 technologies in the game so at most, you can get a 200 Science boost in the late game, which is maxed around 2% of your produce.

Their Emblematic Quarter is a little more useful as it is able to exploit both food and science, counting as both a Research and a Farmer Quarter hence.

It can produce a decent amount of Science early on and is able to generate a small amount of food for your Researchers. For that alone, the Babylonians can be a good science culture.

They also have a disciplined defensive unique unit that can effectively defend your cities.

They are a much weaker version of the Mycenaeans with respect to other aggressive cultures. Their legacy trait will be useful throughout the game.

However, their Emblematic Quarter is almost completely useless. It’s almost as if it didn’t exist. The redeeming quality in their Unique Unit might arguably be the best in the Ancient Era.

Suppression and Charge are two talents that can be quite deadly against all foes.

Almost the same as the Nubians of the Merchant affinity. Additionally, the Phoenicians have a very weak legacy trait as you won’t have any Merchants in the early game, but it does scale a bit better than the Nubians’.

Their Emblematic District is unlocked a little too late in the era to be useful. The only thing that would make them C-tier is if there are Ocean heavy maps where their unique unit can explore a little better.

Thank you for having the patience to read the full guide. If you want to share your views regarding it then you can leave a comment.

I will be back with more guides in the near future. I hope everybody is keeping in good health and spirits. Take care of yourself and have a great day!

We also have a YouTube channel where We upload the latest gaming content for PC and Android. Feel free to check that out at your own leisure.

Got specific suggestions? You can submit them here. Thanks for reading!